How to Improve Diversity and Inclusion in your organisation

Diversity and inclusion are so important, especially in the workplace. The global awakening in recent years with the gender debate, trending Twitter hashtags such as #MeToo, social justice, and high-profile individuals’ behaviour, climaxed in an uproar in 2020 with the Black Lives Matter movement. Our work culture, environment, and personal lives have become so entwined that it’s sometimes hard to separate what matters at work from what matters outside of work but diversity and inclusion in the workplace has always been a hot topic. Many companies have the potential to make a huge impact with diversity and inclusion hires but aren’t doing so. Here are a few reasons why we should be doing something and how detrimental it could be to our businesses if changes aren’t made at every level. 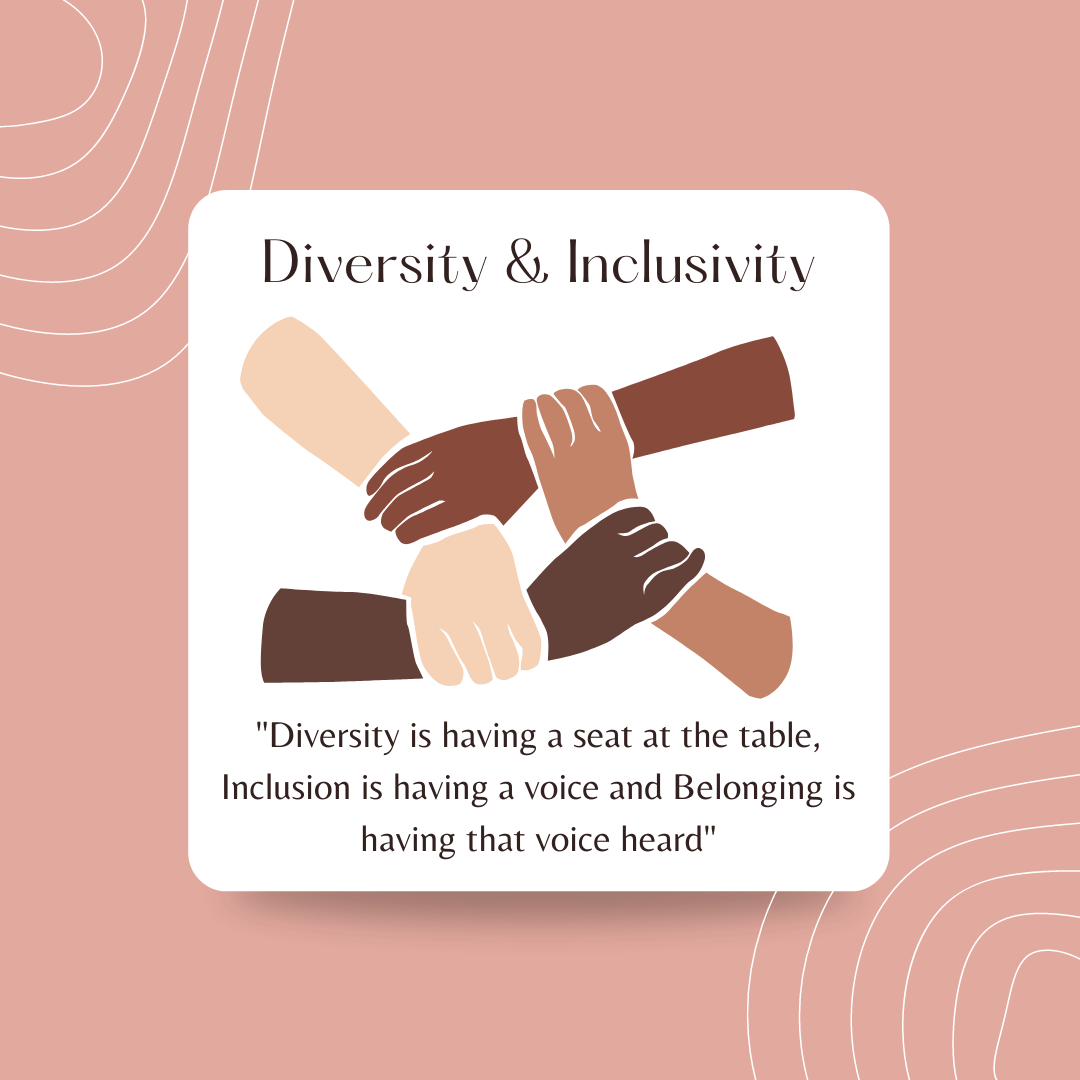 A diverse and inclusive workplace is one in which everyone feels equally included and supported in all aspects of the workplace, regardless of who they are or what they do for the company. The phrase “all aspects” is crucial. It is easy to think that diversity and inclusion are the same: the same aim, the same responsibilities, and the same blueprint for success; given the prominence of the abbreviation “D&I” and the rise of executive roles such as Chief Diversity & Inclusion Officer. However, this is a common misunderstanding that can have ramifications if firms are not attentive.

Diversity entails accepting and celebrating differences. Companies embracing diversity hire employees with a diverse set of values, cultures, and backgrounds. Though most firms evaluate diversity in terms of race, ethnicity, or gender, the truth is that diversity encompasses a considerably broader spectrum of employee attributes, including disability, sexual orientation, and age. Inclusion involves giving people a fair opportunity. Businesses that practice inclusion foster a culture where every person is treated fairly and has an equal opportunity to progress and contribute to the company’s success. We need to ask ourselves what measures need to be put in place to ensure that once a company has a diverse group of employees, they all have an equal chance.

With the Black Lives Matter movement and the LGBTQ+ community speaking out against injustice not only outside the workplace but within, it is time that more businesses make a change. According to Druthers Search statistics, people with Chinese, Indian, or Pakistani-sounding names are 28% less likely to be invited to an interview than candidates with English-sounding names. An additional 62% of LGBTQ+employees hear lesbian and gay jokes at work, 43% hear bisexual jokes, and 40% hear transgender jokes. Making employees feel uncomfortable in their workplace or discriminated against during the interview process is appalling. According to statistics, all BAME groups are more likely to be overqualified than white ethnic groups, but white employees are more likely to be promoted than all other groups. There are endless benefits of a diverse and inclusive workplace – higher revenue growth, greater readiness to innovate, and a much higher employee retention rate, yet many employers are still not doing anything to change this narrative.

Businesses that lack diversity are doomed to mediocrity. Without the ability to draw on a diverse range of perspectives and ideas, the same strategies are used; the same solutions for issues are suggested, and the same goods are produced. This has significant financial ramifications as varied workforces with pro-diversity policies tend to be more inventive and profitable than their non-diverse equivalents.

To improve diversity in your organisation, ensure that your hiring practices are free of biases. When you remove subjectivity from the process of evaluating and hiring job prospects, you can make more accurate comparisons between them. This entails standardising both the questions used in interviews for specific roles (rather than winging them) and the criteria used to evaluate candidates. Make every hiring decision a majority or consensus decision among a group of people to offset the biases of any single person. Another way is by looking for fresh ways to find employment candidates. How can you expect to make a diverse hire if your candidate pool is drawn from the same candidate sources such as job boards, social media groups, and competitors? Post vacancies on speciality job forums to broaden your reach or reach out to prospective passive applicants who are not actively hunting for a new job but would consider a change.

Diverse companies that lack inclusion may appear to be running smoothly on the surface. As minority groups are continuously rejected in their attempts to integrate or progress, resentment builds over time. Employee engagement plummets, prompting workers to seek more inclusive possibilities elsewhere. One way to improve inclusion in your organisation is to adopt inclusive policies. It may be improving your parental leave policy for parents. It could be company-wide recognition of holidays observed by ethnic communities. Greater accessibility choices in your office may be beneficial to people with disabilities. While discussing change is important, effecting said changes to make your organisation more inclusive is key. According to a Harvard Business Review poll, 75% of respondents believe that surface policies and actions are insufficient to achieve true change. They concluded that strong anti-discrimination legislation and leadership commitment were essential. Furthermore, because each company is unique, a customised approach is necessary for success.

It’s important to recognise successful diversity recruiting initiatives, but the work isn’t done yet. If you want your diverse recruits to have an impact, you’ll need to put in just as much if not more effort internally to embrace different people into your company’s culture and leadership.

BusinessClub offering female business owners, career professionals, and entrepreneurs the opportunity to have exclusive access to amenities to boost their work!

It’s crucial to make time for the community that helped nurture you. Find out how: https://bit.ly/324mRUS

Who and what you surround yourself with has a massive impact on you and, naturally, on your business pursuits. Here are tips for Building a Circle that Helps You Thrive!

New blog 🎉 How to Make Money From Your Instagram in 2022!

Take care of your social media the same way you would yourself! ✨

Learn the latest Social Media trends and practices with us, and get paid! Apply now: https://bit.ly/3EmJfH1